For nearly 175 years, the USS Constitution Naval Vessel protected many miles of the Eastern Seaboard. It is now viewed as a historic landmark. Located on the coast in Charlestown, Massachusetts, it is part of the Boston National Park.  Formerly referred to as the Boston Naval Shipyard, the newly renamed Charlestown Navy Yard played a large role in times of war where ships would seek refuge, undergo repairs and maintenance, and be stored for preservation.  From its inception in the 1800s, over 200 warships have been stationed at this naval shipyard.

The Navy Yard served as a pinnacle of technology during its time, from building the Navy’s only ropewalk to being the center of missile and electronics conversions.  With such an impressive history of service during its time, what better way to preserve this incredible landmark than by using the forefront of technology of our time: 3D Laser Scanning.

Maritech, LLC was provided with this incredible opportunity: to help the U.S Navy solve an issue they were having with the drydock door within the Navy Yard. While preparing to drydock the USS Constitution (the world’s oldest commissioned warship, in the U.S. Navy) for a three year overhaul and renovation, they found a leak in the drydock door that prevents seawater from entering the dock.  Unable to determine the source of the leak, they hired Maritech, LLC, leaders in providing engineering services and sales to industrial and marine enterprises. In addition to carrying a full line of optical test and measurement equipment, they specialize in lasers, telescopes, and data acquisition equipment.

After full analysis of the application, Maritech engineers knew the challenge of finding the source of the leak would take more than optical equipment in order to accurately and efficiently collect the data needed to determine the source. Partnering with ECM – Global Measurement Solutions, leaders in 3D laser scanning, alignment, and large scale metrology services, they used laser tracker technology to accomplish the task.

Within the Navy Yard, there is Drydock No.1, originally constructed in 1833 with a wooden door (called a caisson) to separate the dock from the Boston Harbor. The wooden caisson was later replaced with a steel version in 1901. In 2015, the Boston National Park Service hired a contractor to build a new caisson to prepare for the dry docking of the USS Constitution. When the caisson was completed, dropped into the water, and placed against the end of the drydock to seal and keep the water out, the caisson failed to seal.  Maritech and ECM engineers partnered to take measurements of the caisson and the surrounding vessel to determine the source of the leak.

In the field of metrology, using the proper measurement equipment for a specific application becomes a crucial part of the problem-solving process. When determining which piece of equipment to use, it is important to understand the needs and objectives of the customer. In the case of the U.S. Navy, having a leak in the drydock while attempting to preserve a historic naval vessel required highly accurate equipment able to maintain extremely close tolerances.

Maritech’s specialty is optical 3D scanning equipment; however, they knew they would need the Leica AT402 laser tracker equipment, which was better suited for this job. The sheer speed, accuracy, and high resolution of the laser tracker alone made it the right choice for this application. “Using our optical technology on this particular job would have taken more manpower and additional fixturing, resulting in a more labor intensive venture, ultimately costing the customer more money,” states Larry Duddy, Project Manager- Maritech, LLC.  The sheer height of the wing walls of the vessel did not prove to be a great application for optical technology.

Using laser tracker technology, ECM and Maritech engineers worked together capturing data from the caisson itself as well as the surrounding wing walls.  After the data was analyzed, it was determined that the flaw was not in the newly built caisson but within the wing walls where the caisson sealed to the surface.  There was a step with a ¼ inch gap allowing water to leak through the seal between the walls and the caisson. The U.S. Navy was able to modify the surface to allow the caisson to properly seal to the surface.

Best practices in metrology involve a combination of engineering expertise, a solid foundation in dimensional measurement fundamentals, and the proper equipment and software pairing. This provides the desired output and reporting for extremely comprehensive results. Maritech engineers have years of experience in recognizing various metrology applications in a field setting. They knew partnering with ECM would allow them to provide the U.S. Navy with the exceptional combination of expertise and technology needed to accomplish the task. The U.S. Navy can now confidently drydock the USS Constitution for preservation. 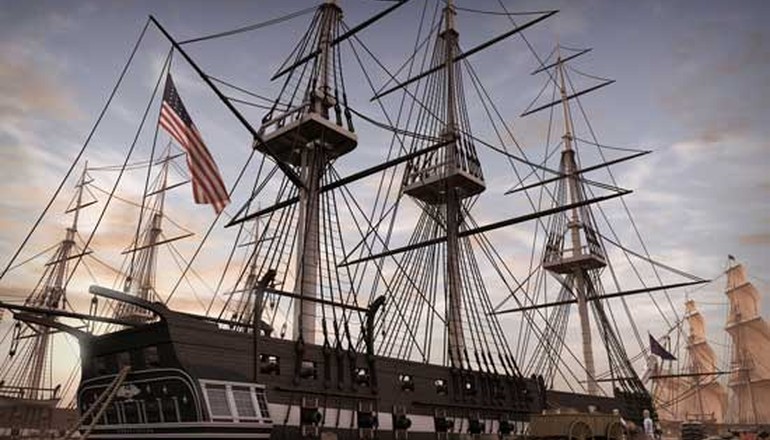 While preparing to drydock the USS Constitution for a three year overhaul and renovation, they found a leak in the drydock door.